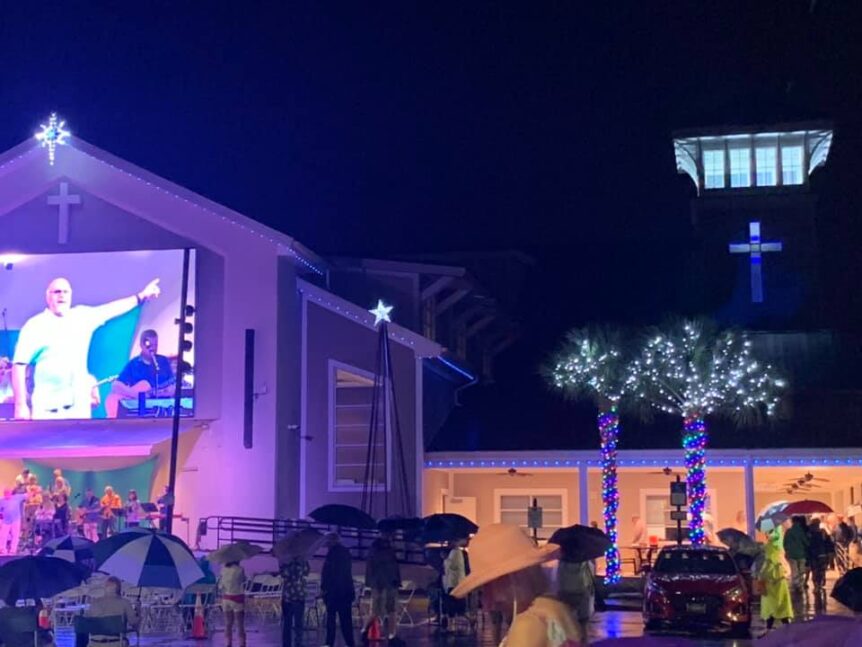 …But That’s Not All!

Nearly 500 worshipers gathered at The Grove on Sunday, October 24, for “I Will Rejoice,” an evening of music and inspiration featuring our own Live Oaks musicians. Undaunted by persistent rain, the crowd praised the Lord along with the 18 vocalists and instrumentalists leading worship from an awning-covered stage.

The Lighthouse Shines
The high point of the evening? That electric moment when the crowd counted down from 10 and Pastor Chris Holck connected the ends of two power cables to make the Woodridge Campus lighthouse and cross glow for the very first time. The top of the 96-foot tower emanated light in every direction, and a soft blue hue lit the cross on the west side facing The Grove.

“It was a concert and celebration for our congregation,” says Pastor Chris. “A lighthouse guides people to safety. It’s a symbol for all who can see it, a beacon that can guide them to a safe place. The cross is the emblem of our faith in Jesus Christ. It communicates hope and peace and salvation to all who see it.”

Soon the beacon and crosses will light up the sky nightly – what Sunday’s gathering saw was a one-time sneak peek as electricians continue to work on the wiring yet to be completed.

…And It Gets Even Better
While everyone expected to witness the illumination moment, no one expected to hear the announcement that preceded it. Pastor Chris referred to his “Get Ready” sermon series from a month ago – and specifically the message out of Acts 2 when he highlighted the generosity of the early church. During that sermon, he described the opportunity that our church had to purchase the Southern Oaks Campus, and he challenged us to pray about what God would have us do to support that purchase. He reminded us that we are 2.5 years into a $7.5 million capital campaign intended not only to fund the completion of our Woodridge Campus expansion, but also to purchase a campus somewhere in the southern portion of our region. The property our Southern Oaks Campus currently occupies had become available, and our leadership was moving toward its purchase. But additional funds were needed to complete the deal. As of a month ago, we were still approximately $1.7 million away from reaching our three-year campaign goal.

Well, generosity poured out from the wonderful people of LOCC. We did not raise just $1.7 million – we raised $2.1 million! In one month! Perhaps we should all sing the doxology or whatever expression of praise comes to your heart at this time!!

In short, we have already exceeded our $7.5 million campaign goal with five months to go before the campaign ends – any additional giving will lower our debt. We all like that idea. Included in our campaign, now totaling more than $7.6 million, is $1.3 million in commitments that many people intend to fulfill prior to March 31, 2022.

This good news was met by raucous horn honking and rejoicing – and the jubilation was heightened even more just moments later when the tower lights beamed bright for the first time. It was a night to remember during our first decade of ministry for Live Oaks Community Church.